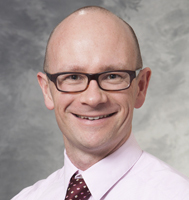 Our work is focused on vocal fold mucosal biology. Vocal folds are uniquely housed at the boundary of the upper and lower airways and gastrointestinal tract, and are the only tissues in the human body that routinely oscillate at frequencies ranging from ~100-1000 Hz, in order to generate voice. Voice disorders influence around 5% of the United States population at any given time, cost the economy up to $20 billion per year in health care costs and occupational productivity loss, and so represent a meaningful medical, scientific and societal problem.

Fibrosis: Vocal fold injury resulting in scar formation is a recalcitrant clinical problem. Our group has worked on this problem for over a decade, with a particular focus on characterizing the role of migrating cells (e.g., bone marrow-derived progenitors, leukocyte subpopulations such as fibrocytes and macrophages) in the injury response. As part of this work, our group introduced a mouse surgical injury model, which has enabled the use of transgenic technologies in tackling this problem. We have examined re-epithelialization, the role of vitamin A-storing vocal fold stellate cells, and the therapeutic potential of biologics such as recombinant TGF-β3.

Systems Biology: The vocal fold is an exquisite, purpose-specific biological system that facilitates voice production. Classic studies of the vocal fold mucosa and its underlying thyroarytenoid muscle have focused on individual or small groups of genes, proteins, and glycans, selected based on historical precedent and their importance in other systems. This work is useful, but does not reflect the vocal fold’s inherent biological complexity. In partnership with our collaborators, we have harnessed tools from systems biology to characterize the vocal fold at the transcriptomic and proteomic levels. This work is providing new insights in the areas of basic mucosal biology, muscle biology, wound healing, and tissue engineering.

Tissue Engineering: There are a number of preclinical and clinical approaches to treat impaired vocal fold mucosa; however, in cases of profound tissue impairment or loss, the best option may complete tissue replacement. Towards this goal, our group has been working on the development of a physiologically-appropriate engineered vocal fold mucosa for eventual clinical implantation. This engineered tissue is generated via 3D organotypic culture of primary human vocal fold mucosal cells in an acellular scaffold, and has shown significant promise in preclinical studies.