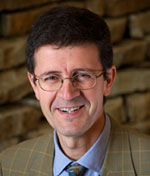 Molecular mechanisms of neurodevelopment and neurodegeneration

Our broad research interests are focused on molecular mechanisms of neurodevelopment and neurodegeneration. Our laboratory employs a combination of biochemical, cellular, molecular, and genetic approaches in in vitro, ex vivo and in vivo models. In 2007 we reported that nascent proteins could undergo Nε-lysine acetylation in the lumen of the endoplasmic reticulum (ER). This discovery resulted in the identification of a previously unknown biochemical machinery that impacts on the biology of the ER.

We now know that the ER acetylation machinery regulates two essential functions of the ER: (i) efficiency of the secretory pathway (as part of quality control) and (ii) disposal of toxic protein aggregates that form within the secretory pathway (through autophagy). We also know that the flux of acetyl-CoA into the ER regulates cross-talk between different intracellular compartments.

A dysfunctional ER acetylation machinery has been linked to developmental delay and premature death, autism spectrum disorder and intellectual disability, autosomal dominant spastic paraplegia-42, and Alzheimer’s disease. Our laboratory has generated mouse models that mimic the above diseases and dissected relevant pathogenic pathways. Our results support findings obtained from human-based studies and indicate that the ER acetylation machinery plays a crucial role in both neurodevelopmental and neurodegenerative diseases.

1) Dissection of biochemical and molecular pathways that link the ER acetylation machinery to neurodevelopmental and neurodegenerative diseases. Our group identified the ER acetylation machinery and showed its fundamental role in physiology and pathology. We are now expanding these studies to clearly understand what “goes wrong” in associated human diseases. New relevant mouse models are being generated to extend our findings. Our overall goal is to identify targets for possible therapeutic intervention.

2) Identification of the biochemical and molecular mechanisms that maintain cross-talk between different intracellular compartments. One fundamental aspect of cell biology is that the different intracellular compartments are able to talk to each other and maintain homeostasis. We now know that the intracellular flux of acetyl-CoA allows cross-talk between ER, cytosol, mitochondria, and nucleus. This “signaling function” of acetyl-CoA appears to be crucial for different forms of neurodevelopmental disorders (including autism spectrum disorder and intellectual disability, spastic paraplegia, neuronal hypoplasia and developmental delay, and epileptic encephalopathy) and neurodegenerative disorders (including Alzheimer’s disease and other forms of age-associated dementias). Therefore, it is imperative to identify the key players that regulate this intracellular cross-talk. This will help us dissect specific pathogenic mechanisms and identify potential therapeutic targets.

3) Molecular mechanisms of cognitive loss during aging and Alzheimer’s disease neuropathology. We have identified a novel link between aging and Alzheimer’s disease, which, when hyperactive, results in synaptic and cognitive deficits, and in severe degeneration of memory-forming and -retrieving areas of the brain. The molecular mechanisms involved in these events are being actively sought.

4) Drug discovery for the prevention and cure of neurodevelopmental and neurodegenerative disorders associated with dysfunctional ER acetylation. As mentioned above, the intracellular flux of acetyl-CoA and the ER acetylation machinery maintain the homeostatic balance of important cellular functions. This balance appears to be disrupted in specific neurodevelopmental and neurodegenerative disorders. We have identified compounds that under certain conditions are able to reestablish the balance and correct associated deficits. Mechanisms of action as well as therapeutic potential are being actively studied.