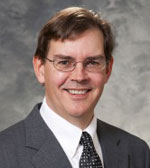 Regulation of ganglion cell death and the role of Bax. In glaucoma, ganglion cells die using a classic intrinsic apoptotic program, which is highly controlled by members of the Bcl2 gene family. This was most effectively demonstrated by our studies using mice with homozygous for a mutant allele of the proapoptotic Bax gene. In these mice, cell death was completely abrogated in both acute and chronic models of ganglion cell loss. We also study Bax gene expression as a quantitative susceptibility allele, and have documented changes in the rate of ganglion cell death that correlate with modulations in the level of Bax gene expression. In the natural mouse population, we described a single nucleotide polymorphism in the Bax promoter that affects gene expression by 50%. Interaction of factors with this site is also modulated by genetic background, which presumably affects the capacity of the transcriptional machinery to regulate expression depending on which allele of Bax is present. Studies are underway to address the influence of genetic background on Bax expression using constructs that carry the polymorphism, and to identify the critical binding factors for this region.

An important part of ganglion cell pathology also appears to be interactions with retinal glial, which mediate the innate immune response of the retina after damage. Glial activation is thought to lead to release of pro-inflammatory cytokines, which then contribute to the ganglion cell death process after optic nerve damage. Importantly, the glial activation response is impaired in Bax-deficient mmice, indicating that an initial wave of complete cell death is required to initiate the innate immune response. The fundamental steps in this process are being tested in genetically modified mouse models of optic nerve damage.

Regulation of BAX activation and aggregation. The mechanism of BAX activation and aggregation at the mitochondria is one of the unsolved events of intrinsic apoptosis. Our studies show that aggregation of wild type BAX protein is dependent on the concentration of BAX present in the cytoplasm. Titration of BAX levels in cells reveals a critical threshold for all-or-non aggregation of this protein in cells challenged with an apoptotic stimulus. Studies using live cell imaging are being conducted to explore this phenomenon further, including direct measurements of co-operative binding of BAX, and the relationship between the initial activation step and the recruitment of mutant BAX molecules during aggregation.

Epigentic changes in apoptotic ganglion cells leading to gene silencing. Dying retinal ganglion cells undergo dramatic early molecular changes prior to committing to the apoptotic pathway. One of these changes is a global silencing of normal gene expression. Understanding the mechanism of gene silencing is important, since efforts to block the apoptotic program will be futile if there is no way to reactivate normal cell gene expression and function. Current studies in the laboratory have focused on alterations in the histone code, beginning with rapid deacetylation of core nucleosome histones. Following injury to the optic nerve, ganglion cells rapidly exhibit the deactylation of histones in a variety of gene promoters. This deacetylation process is accompanied by the activation of Histone deacetylase (HDAC) 3, which becomes translocated to the cell nucleus. HDAC inhibitors, given systemically, are able to attenuate both the down-regulation of gene expression and the loss of ganglion cells. We are now investigating the functional importance of HDAC3 activity in the cell death process.

Identification of ganglion cell death susceptibility alleles. Glaucoma is considered a complex genetic disease in the human population, similar in etiology to Alzheimer’s Disease, ALS, and Parkinson’s Disease. The ability to identify genetic susceptibility alleles is not trivial, especially in cohorts of human patients, which require large numbers and detailed disease classification. We are using a reverse genetics approach involving large screens of inbred mice, to identify loci that affect various quantitative traits associated with glaucoma. In our first study, we identified a locus on chromosome 5 that dominantly affects ganglion cell death in response to an acute lesion of the optic nerve. This locus is being evaluated further to identify the causative gene and is being congenically bred into a mouse model of chronic glaucoma to test its role in modulating disease progression and severity. Additionally, we have collaborations with human molecular geneticists at Duke University who will evaluate loci we describe in mice for associations with disease in large collections of normal and affected human patients.