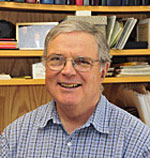 My laboratory studies how cells respond to various stimuli by changing shape and cell migration. The starting point is extracellular proteins such as fibronectin, vitronectin, and thrombospondins. These proteins are incorporated into the extracellular matrix and influence cellular behavior. The proteins are complex and multi-modular and have obscure structure/function relationships. All mediate cell adhesion and are recognized by cell surface integrins. All interact with a number of other molecules in the extracellular milieu. We use a variety of biochemical, biophysical, cell biological, molecular biological, immunochemical, histological, and ultrastructural techniques to analyze these these molecules and their functions.

Fibronectin assembles into extracellular matrix by binding reversibly to receptors on cell surfaces and then undergoing a conformational change or covalent crosslinking to be incorporated irreversibly into the extracellular matrix. The cytoskeleton controls fibronectin assembly by signalling pathways that are initiated by binding of two small lipid mediators, lysophosphatidic acid and sphingosine-1-phosphate, to receptors of the EDG family. The goal is to describe all parts of the fibronectin assembly pathway, from initial stimulation of EDG receptors to characterization of the cell surface molecules that respond to cell contraction by binding fibronectin. We are particularly interested in how integrin cell surface adhesion receptors participate in the assembly of fibronectin, how this participation is related to other functions of integrins, and the role of integrin phosphorylation in integrin function.

There are five described thrombospondin genes in vertebrates and one in flies. Single nucleotide polymorphisms (SNPs) of the genes for human thrombospondin-1, -2, and -4 have been linked to premature coronary artery disease. Mutations of thrombospondin-5 cause skeletal malformations. We are using recombinant baculoviruses to express multi-modular segments of thrombospondins and carry out pioneering studies that give insight into how the SNPs may cause pathophysiology. Our current goal is to understand the conserved and highly labile structure formed by the C-terminal 600 residues of thrombospondins. This portion of thrombospondin binds more than 20 Ca2+ ions with high cooperativity.

Our third project concerns how b1 and b7 integrins control the migration and survival of fibroblastic and hematopoietic cells. These studies are based on the finding that conserved tyrosines in the cytoplasmic domain of b1A mediate directed cell movement. The major focus of this project is how the integrins control the movement of eosinophils into tissues during allergic reactions.