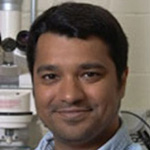 My lab is currently involved in three areas of research, all of which focus on GABAergic inhibition and are related to understanding mechanisms of epilepsy and disorders with overlapping symptoms (e.g., Alzheimer’s disease, autism spectrum disorder), and developing possible treatments.

1) Biophysics of the GABAA receptor – The majority of my published work deals with understanding how GABAA receptors function as molecular transduction devices. This entails transfecting GABAA receptor subunits into HEK293 cells, and recording currents from excised patches using patch clamp electrophysiology. Receptors are activated using a multibarreled flowpipe array to exchange solutions containing agonists, antagonists or modulators with submillisecond exchange times. Receptor currents are recorded, their kinetics analyzed, and mathematical model fitting is used to describe receptor function and extract microscopic rates of conformational changes in receptor structure. Since attaining the rank of Associate Professor in 2007, this work has resulted in the PhD Thesis of Dr. Marcel Goldschen-Ohm (Dept. of Physics), and the following publications:

Future Plans – We continue to work in this area, and have developed a theory of how allosteric modulators (e.g., benzodiazepines) and mutations (e.g., γ2R43Q, see below) transmit their effects throughout the extracellular domain of the receptor (manuscript in preparation). Future work will test this theory using mutagenesis and molecular modeling.

2) Inhibitory alterations underlying generalized epilepsies – A point mutation in the GABAA receptor (γ2R43Q) causes absence epilepsy in humans. We previously demonstrated the effects of this mutation on receptor biophysics (Bowser et al., 2002; Goldschen-Ohm et al., 2010). The current project aims to determine how this mutation alters inhibitory signaling and leads to epilepsy in knock-in mutant mice expressing the mutation. This work is funded by NIH (R01 NS075366 – PI: MVJ) through June 2016. To date, we have discovered that although the mutation is in a subunit (γ2) that is predominantly localized to synapses, synaptic transmission is relatively normal. Instead, nonsynaptic “tonic inhibition” is entirely abolished. This deficit is associated with changes in the trafficking of several non-γ2 subunits that are typically involved in tonic inhibition. In addition, using multielectrode extracellular recordings (in collaboration with Steve Johnson, VetMed), we show that the loss of tonic inhibition alters cortical excitability and thalamic bursting in a manner consistent with the absence phenotype. Since 2007, this work has led to the following publications (in collaboration with Steve Petrou, Univ. Melbourne):

Future Plans – We continue the multielectrode recording work, and also continue studies of how the loss of tonic inhibition alters cellular excitability and responses to thalamocortical synaptic drive. In addition, we have begun to correlate the in vitro phenotype with in vivo seizure properties (in collaboration with Chiara Cirelli, Psychiatry), and to test the effectiveness of drugs, in vivo, that could selectively correct this type of seizure disorder.

3) Inhibitory sculpting of signal flow in the hippocampus – The dentate gyrus is the major site of cortical input to the hippocampus, and is rich in inhibitory circuitry. The goal of this project is to understand how inhibition routes excitatory signals through the dentate gyrus, and subserves the putative computational function of this structure: pattern separation. We discovered that a) incoming cortical excitation primarily targets inhibitory interneurons rather than excitatory principal cells, b) this feedforward inhibition is sufficiently strong to almost completely silence principal cells, and thus “gate” signal flow through the dentate, c) inhibition can be relieved under certain conditions of input patterns (e.g., afferent activity arriving near “theta” frequency – ~ 10 Hz). Since 2007, this work has led to the Ph.D. thesis of Dr. Laura Ewell (Dept. of Physiology) and the following papers:

Future Plans – We continue work on this project, and intend to use multielectrode recordings to explore both temporal and spatial aspects of pattern separation in the dentate gyrus, with emphasis on the role of inhibitory circuitry and the special conditions under which inhibition can be relieved to “gate” signal flow through this structure into the rest of the hippocampus.

4) Miscellaneous – In collaboration with others, the following papers have emerged that do not fit under the three main areas of focus described above: